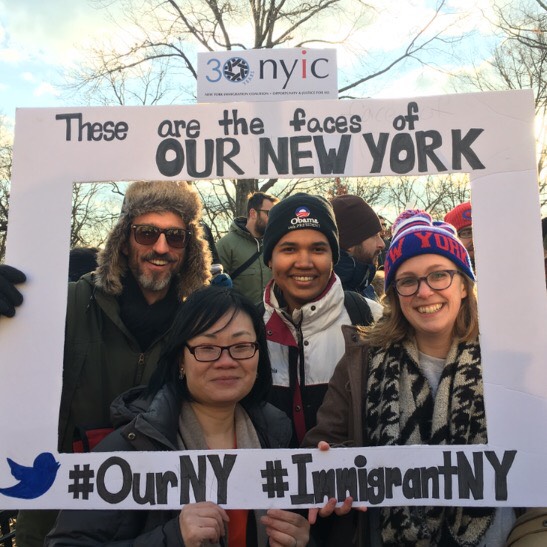 The NYIC's Senior Manager of Health Advocacy Max Hadler sat down with us last week to discuss the impact of the American Health Care Act on immigrants - and all New Yorkers - and the NYIC's advocacy against the bill, as well as how he came to the NYIC and what it means to work on health advocacy for immigrants during this uncertain time.

What brought you to the NYIC?

My interest in immigration and health comes from the three years that I spent as a Spanish language medical interpreter in a hospital in Connecticut. I did language access work with immigrant patients, which led me to learn about the different barriers to health access that immigrants face. It made me really interested in policy, and in the problems in the system that cause immigrants to have so much trouble accessing health services. I got a Master’s degree in Health Policy and did a lot of research, but the research seemed a little too abstract. The work that the NYIC is focused on is turning research and policy into advocacy, and advocacy into meaningful change - and working with directly impacted people - so it’s a mix of everything relating to immigrant health. It’s perfect.

Can you tell us more about the Health Advocacy Team and what you do?

We are all about making the healthcare system function better for immigrant New Yorkers. One of the ways we do that is by making sure immigrants have access to health coverage. Right now we’re trying to change policies that restrict coverage based on immigration status - for example, based on someone’s status they might not be eligible for certain benefits like Medicaid. We want to ensure everyone has access to health services - so that someone who is undocumented and can’t enroll in insurance programs can still access basic health services and community health programs. There’s a big “know your rights” component to our work, too, as we want to make sure that New Yorkers know about all of the protections we already have around language access and financial assistance - regardless of status - and that they should take advantage of those services. Lastly, we work to ensure that these healthcare systems are well-supported, because they provide so much important care to immigrant communities.

What is the American Health Care Act (AHCA) and what are the threats it poses to New York’s immigrants?

The AHCA is a nightmare of a health care reform bill. The biggest way that it affects immigrants is by undercutting the Medicaid program, and completely changing the way that low-income families can access health insurance. It will take away health insurance away from 24 million people - and a lot of those people are immigrants and naturalized citizens. Additionally, there are portions of the bill that specifically target immigrants and further limit their eligibility for programs like Medicaid. The biggest change for immigrants, like everyone else, is not what it does to the Affordable Care Act but what it does to Medicaid: the AHCA would kill Medicaid as we know it… New York State would be looking at $4-5 billion in health care cost deficits. Medicaid covers nursing homes, special education services in schools, people eligible for the program - and many immigrants fall into those categories.

What has the NYIC been doing to push back against the AHCA?

We have a lot of partners at the national level, and also partner with a lot of organizations like the NYIC in other states, with whom we’ve been strategizing. In New York State we’re a part of different coalitions for health advocacy, and we’ve been working to make sure that people understand that the AHCA is not just about repealing the Affordable Care Act - it’s actually about taking away Medicaid from many people. We’ve put out statements and have specifically targeted electeds from NYS, especially people in the majority party in the House of Representatives who have a particular influence, to make sure that their constituents (and NYIC members within those districts) are reaching out to their representatives to tell them the impact that this healthcare bill has on immigrant communities and on all of their constituents. Now that 7 of the 9 representatives have voted in favor of the AHCA, we are calling them out on it and making sure they understand what the bill means for their constituents the next time they have to vote for it (because it’s very likely there will be another vote - and we will be leading advocacy efforts against the AHCA then as well).

Are there any other major health shifts that your team is responding to?

I think the bigger issue that we’re dealing with right now isn’t so much as a policy shift, but a shift in understanding of what’s happening, because there’s so much fear around policy shifts that may come down the road. Since there’s been so much fear and anti-immigrant rhetoric since the election, we’ve been spending more time prioritizing “know your rights” trainings to member staff, community groups, and New York Health + Hospitals to just get the word out. People think that everything has changed and the reality is - in the letter of the law - that nothing has changed yet. Immigrants, and everyone else, still have the same access to health coverage right now that they did in October of last year.

What does it mean to be working on immigrant health access in this environment?

It means plugging the holes in people’s knowledge and understanding while at the same time trying to lift up immigrant health care access as a really important issue that can’t be sidelined. Immigrant health care access needs to be a part of the healthcare conversation, along with all of the other important conversations happening - and all of the other things happening in the immigration realm. Ramped-up enforcement and anti-immigrant rhetoric is causing an extraordinary amount of pain, trauma, and mental health issues in immigrant communities - and as mental health issues are wrapped up in the same health care system with all these existing barriers and insufficient funding, they should be a priority as well if we want to bring holistic service provision to immigrants in this environment.

Coverage For All! Regardless of what’s happening on the federal level, we need to continue moving forward to advance positive and progressive immigrant health policies on a state level, and one way that we’re doing that is our Coverage for All campaign, which aims to expand coverage for young adult immigrants in New York State who are currently excluded from coverage.