I was born in El Salvador and came to the States in October of 1981. My mom was a teacher at the time in El Salvador, and she was part of a group of teachers who advocated for better salaries and work environment, much like a teacher’s union. The government did not allow people to organize and deemed these teachers “communist”, and told my mom that they would kill her and her sons if she did not leave the country. She was thirty-eight at the time, my older brother was fifteen, and I was seven years old. I remember bits and pieces of life in El Salvador, and my memory remains hazy from that period. I remember taking a bus from El Salvador to Mexico, which is where my family split up, in Guadalajara. 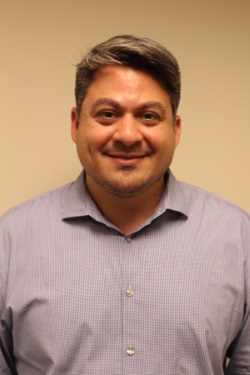 My mom and brother ran across the border 24 hours before I did, the coyote “in-chief” promised my mom that I’d be driven across, in fact, that did not happen. I ran across, approximately 12 hours, around Tijuana airport and the desert. I was with a coyote that helped me on my journey across the border, and I recall hiding from helicopter lights and him carrying me when I was too tired to keep running. I’ve told this story many times in various settings, and I’ve always thought of him as a guide and not as a smuggler. After all, I thought of our journey as the search for a better life and as running for our lives with our lives directly threatened in El Salvador. He guided me through my crossing from one life to the next, and I didn’t think I was doing anything wrong. I came here for a better life, my mom wanted more for her sons; she wanted them to be safe, to live. It wasn’t until recently when I was telling my story at the National Hispanic Medical Association to a group of physicians, that someone reacted to my use of the term “guide” and corrected me: “You mean a smuggler?”

I had never thought about it like that before! But that is a significant differentiation that is the difference between two versions and perspectives of one fact. The objective truth is that I crossed a border, and it hit me that people judge that act in such different ways based on their political stance. All three of us made it to the States safely, and our first stop was in L.A to the house of family friends. My mom had teacher friends in New York City, so we soon moved to the Bronx, where I started second grade. I was in ESL for one year in the Bronx, moved on to the “regular” track through sophomore year of high school, and then moved to Manhasset for better the latter half of high school. It was a school that had a mix of working class and upper-middle class students, and overall it was very affluent; I often felt out of place, an outlier, a fraud, it was painful. We became eligible to apply for a “green card” during the 1986 Immigration Reform and Control Act (IRCA).

I later went to the State University of New York at Old Westbury and did very well after my freshman year. I transferred from Binghamton University, where I “earned” a 1.7 GPA my first semester because I wasn’t focusing, and it’s a story I always tell my students in order for them to know that mistakes happen, and you always have the choice to persevere, try again, and succeed. It’s important to take these decisions seriously though, because they will affect you for the rest of your life. I ended up still going to medical school and completed my Anesthesiology residency at the University of Miami. That was a really difficult period of my life, residency is grueling and takes a lot out of you, it deconstructs you without building you back up, that’s your job afterwards. Throughout my career, I’ve worked at the NIH, the FDA, and other companies, and now I’m happy to say that I am a Medical Director at Pfizer. I really love my job and I’m often in awe of how everything has come together in my life, countless blessings that I am not sure I deserve. It’s been a lot of hard work and everything has allowed me to move on to the next place, to the next blessing in my life journey. I have been often questioned on my decisions but chose to listen to my gut, which has always guided me in the right direction; not the easiest decisions, but the correct ones resulted in a state of peace, excitement, and joy.

My path has taught me that everyone needs a helping hand; I wouldn’t have gotten to where I am today if it wasn’t for the support of others, and of course, through God’s grace. Whether you are undocumented or whether you have access to a lot of resources, everyone needs help at some point. I think it’s only fair that the immigration system is structured such that if helps those who want to be productive in this great nation because everyone deserves a chance to succeed and pursue their dreams. For undocumented immigrants that come here to work and be productive, there should be a pathway to citizenship. Without that pathway, many live in fear and anxiety, and that’s inhumane. To those who are undocumented, I want to say to continue pursuing your dreams, follow your gut, and always try to improve your surroundings and the surroundings of others. Try to find mentors along the way and go after what it is you dream of. In the meantime, my desire is to advocate for and defend those (undocumented immigrants) that cannot or will not (due to fear) advocate or speak up for themselves.

Mario Mendoza lives in Manhattan and is a Medical Director at Pfizer.