“We condemn hate and evil in all of its ugly forms”, stated President Trump during his first joint address to Congress last night, the same man that has just implemented a program designed to politicize grief and deepen the country’s divide.

VOICE -Victims of Immigration Crime Engagement- is part of President Trump’s new plan to “to serve American victims” by “providing a voice to those who have been ignored by our media, and silenced by special interests.” In other words, VOICE will be targeting victims of crimes committed by undocumented immigrants to highlight the supposed imminent threat the latter poses to our society and national security.

Victims of crime and assault should be honored, but what makes the crimes committed against Americans any more condemnable than those committed against immigrants? VOICE paints an alarmingly deceitful and demonizing picture of undocumented immigrants in the United States, as it operates on the premise that immigrants are biological immoral and criminals by disposition. 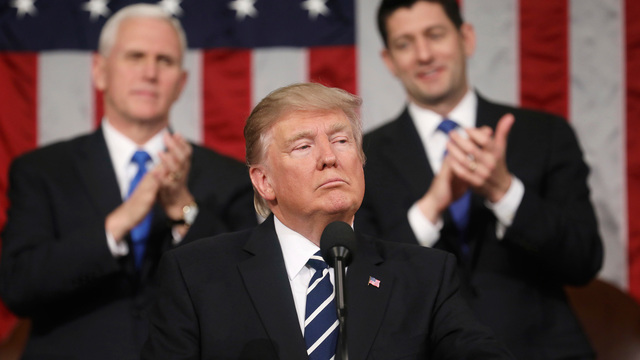 VOICE will, above all, be stigmatizing an already discriminated against group by singling out crimes it has perpetrated - a practice not unfamiliar to Hitler, who published and publicized offenses instigated by Jews in Nazi Germany to collectively portray them as unassimilable and discordant.

Not only is this presumption about the innate immorality of immigrants dangerous and deeply divisive, but it is fabricated. It is “Trumped up.” According to a 2007 National Bureau of Economic Research Paper by Wellesley College economist Kristin F. Butcher and Rutgers economist Anne Morrison Piehl, “immigrants have much lower institutionalization (incarceration) rates than the native born.” Giving any importance to the truth in this age of “Alternative Facts” would entail both recognizing and honoring the reality that immigrants commit less crimes than native-born Americans.

This means that since 9/11, zero deadly attacks were carried out by immigrants from the seven Muslim-majority countries targeted by the travel ban.

When President Trump speaks about “outside threats”, he takes a less than introspective lens on the reality of national security on the ground and refuses to take responsibility in how his exclusionary policies put this country at great risk. Trump’s systemic scapegoating of immigrants focuses on building walls, separating families, and excommunicating hard-working and well-intentioned individuals. Trump’s America ignores the threat of “mentally disturbed lone-wolfs” -a term commonly used to exonerate White American crime and avoid labeling the latter as terrorism as a direct result of US exceptionalism.

We must continue to fight back. While the media disturbingly applauds President Trump for sticking to his script and overall seeming “positive,” it does not change the ultimate content of his words. America deserves more than this.

While some believed Trump’s initial racist policies and xenophobic rhetoric to be media stunts and ways to successfully reel in highly conservative right-wing voters, it has become apparent that the President has waged a full-fledged war on immigrants, with the help of an army composed of ICE officers.

Written by Ayla Ojjeh. Ayla Ojjeh is NYIC's communications research assistant. She is studying at NYU, is originally from Syria and grew up in France.