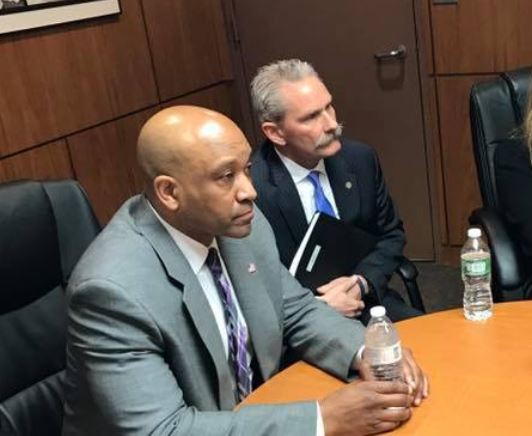 There were hopes that Sheriff Toulon, a Democrat, would follow his national party’s lead by reconsidering DeMarco’s anti-immigrant program. Toulon has not. Toulon was asked at a roundtable in Yaphank if he would reconsider honoring non-judicial detention warrants issued by ICE. Toulon responded; “If you look at the administrative detainers, there’s probable cause, so we’re giving the law enforcement agency, which we would do with anyone — it says probable cause, we’re going to hold them.” Toulon told the Riverhead Local that “ICE will stay in this jail.”

I met with Toulon recently at a meeting he held with concerned Suffolk residents at Suffolk Community College. Toulon said that his decision to honor non-judicial warrants had not come lightly. He said that he had only arrived at it after consultation and deliberation. I asked him which immigrant community representatives he had met with in his consultations. He replied that he had not met with any. I asked him if he had consulted with police or sheriff’s in other jurisdictions and he responded in the negative. After further questioning, it appeared that the only consultations that had taken place were with a few individuals in the Sheriff’s Department and with the new Suffolk District Attorney Tim Sini.

Toulon told the community members that his policy was designed to insure that criminals with multiple felony convictions were held for ICE. I asked him what would happen if a person with no prior arrests was acquitted of any criminal charge. Toulon said that the immigrant would still be turned over to ICE if there was an administrative warrant.

In Suffolk, the sheriffs do not patrol the streets. They do run the county jail. In that capacity, they come in contact with many immigrants awaiting trial for misdemeanors and felonies. All of these immigrants are now in danger of being turned over to ICE if they have an outstanding non-judicial warrant.