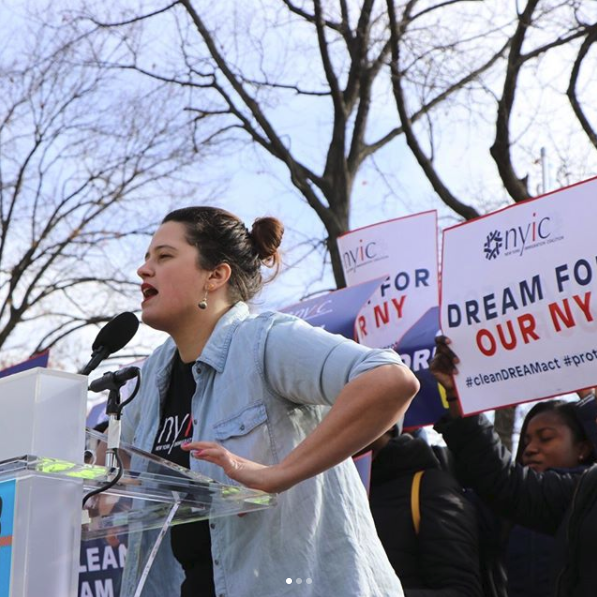 Q. First, tell us what happened at the rally. How did the December 6th mobilization go?

The December 6th mobilization to Washington DC to protect TPS and pass a clean DREAM Act was very powerful and beautiful. It allowed the NYIC to bring members from different parts of the state in a powerful statement that we are a statewide organization. We had people from Rochester, Syracuse, Hudson Valley, Long Island, and all the boroughs of New York City. This is something that we were working on for years and became a reality last week in DC. We sent a clear message to Congress and Washington that we are standing up for all immigrant in the entire state of New York.

Q. What’s the importance of demanding a “Clean Dream Act” instead of just a “Dream Act”?

There is a confusion between the "Dream Act" and a "Clean Dream Act." And essentially, they are the same thing. But the movement added the word “clean,"because we don’t want to see any unnecessary attachments to the original Dream Act like additional border enforcement, ICE agents (Immigration & Customs Enforcement), any increased in funding for patrolling, or an end to TPS programs, etc. That’s something that we are struggling with because we are trying to find a solution for DACA recipients. But we also know that Congress could compromise on our asks in order to pass anything and we can’t let that happen.

Q. From DACA and TPS recipients and other undocumented immigrants that you have met, do they feel empowered by these kinds of actions? Do they feel like this can create real change? Are they optimistic or pessimistic over the future of this movement?

In general, people are feeling anxious and disappointed, of all the constant attacks refugees and immigrants have received the past year.

Q. We’ve talked a lot about policy so far. How about you tell us more about yourself? What was your experience that led you to start working with the NYIC?

Going to school undocumented without DACA at the time, pushed me to organize my community and the undocumented student population at my college. Using the examples of many other undocumented activists that organize nationally, who went on hunger strikes, engaged their elected officials, put the pressure like we are doing once again, was the way undocumented young immigrants became a political force, a movement.

Unfortunately, the DREAM Act didn’t happen when I was organizing during college. But during the Obama administration, DACA was created, and that allowed us to work in this country and to organize in a much bigger way. In 2014, a little bit after I got my DACA status, I became a staff member at the NYIC. Ever since then, I’ve been organizing nationally, statewide, and locally where I live on Long Island.

Q. You mentioned that you started working with the organization since 2014. How do you think the NYIC has changed as an organization in the last year, with this new political climate where there is a mixture of deep concern within immigrant communities, but also a more emboldened resistance against xenophobia, deportations, and the actions carried out by ICE (Immigration Customs and Enforcement)?

I think the NYIC has changed tremendously over the past year, starting with our mission statement. Given the current political climate, we’ve had to respond in many ways to all the different attacks that the movements and communities have been receiving, over the course of this past year. And it has allowed us to be leaders in this fight to make sure that immigrants are respected in this country and to organize more thoroughly, across the state. And to cement the NYIC, as a national leader in the fight for immigrant rights.

Q. What’s important to you, regarding values. What motivates you to do the kind of work that you do?

What motivates me is my commitment to this issue. As an immigrant who was undocumented for several years, I understand the struggles and the problems our community faces. I also appreciate the benefits of having a program like DACA and have the will to continue to fight to make sure that this program becomes more inclusive. And that there is a permanent solution to a more prominent issue, which is in this case, to reform our current immigration system.

Also, I’ve been incredibly grateful, to have been able to meet immigrants who have different immigration experiences from mine. And that has allowed me to make sure it becomes a part of my work – to fight for them too.

Q. Even with the current political climate, do you personally see any hope for the future?

It is a complicated question. (*laughs*) I hope that this country will do the right thing. But overall, DACA and TPS recipients will find the strength to continue to fight for themselves and their families. And to know that they are part of this country.

Q. What would you recommend to people who just started becoming politically active and want to help immigrant communities under assault by this administration? How can they get involved and be a part of a movement?

I think that’s a great question. One really great way to start getting active is to have conversations with family, friends and ask what immigration means to them. Because there is a lot of misinformation about the “other.” Sometimes all it takes is just telling their story to connect, to help others understand the issue on a more human level. And I think that’s what is missing from the conversation. That’s a great way to start to stand with immigrants.

Q. Is there anything else you want to add?

I do want to say that I think it is essential to take care of ourselves too, especially if we know that we are in these fights for immigrant rights for the long run. These are not easy times. And we need to make sure we acknowledge that, to take the extra steps to stay healthy. So if you need to see a therapist, or take a night off, break from work, or even a break from the movement, do it. We can’t help the immigrant community if we don’t help ourselves first.