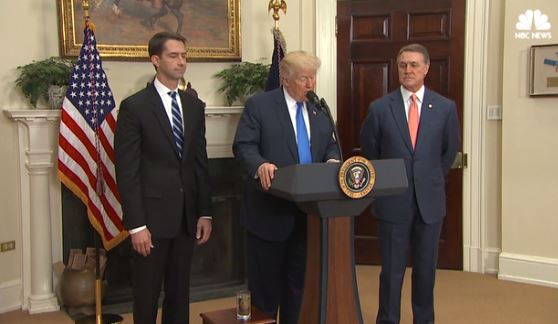 President Trump called for an end to the family-based immigration system in a speech today. Currently, more than two-thirds of immigration to the United States is based on the immigrant having a close family relationship to an American Citizen or Permanent Resident. Trump said he would change that and cut overall immigration by 50%.

Trump said that he supports passage of the RAISE Act, a bill supported by the anti-immigrant fringes of the Republican Party. He hopes to replace family-based immigration with a new points-based system for receiving a Green Card. According to the president, “this competitive application process will favor applicants who can speak English, financially support themselves and their families, and demonstrate skills that will contribute to our economy.” In other words, being reunited with your family will not be as important as speaking English. Mind you, at no time since the Civil War have a majority of immigrants spoken English before arriving here.

Trump also did his usual lying in presenting his proposal. He said:

“The RAISE Act prevents new migrants and new immigrants from collecting welfare…And that's a very big thing. They're not going to come in and just immediately go and collect welfare. That doesn’t happen under the RAISE Act. They can't do that…”

Of course, as anyone who is familiar with the law can tell you, nearly all family-based Permanent Residents are barred from “welfare” during the first ten years that they live in the country. We don’t need a new law to accomplish that. That already is the law and has been since 1996.

The president also sounded alarmist notes by repeating the lies that immigrants take jobs away from the native born and that immigration harms members of racial minority groups. Oh, the irony! On the same day that the Trump Justice Department is reportedly seeking to end Affirmative Action for African Americans, Trump anoints himself as the defender of the rights of people of color against legal immigrants.

The RAISE Act is unlikely to pass any time soon. Support for it is likely to be garnered slowly and it does not have any chance of coming to the floor in the Senate this year. Still, its introduction will do harm. The president will continue to lie about immigrants to try to build momentum for its passage. This will increase popular hostility towards immigrants among some on the right. The conversation of immigration reform may shift away from the DREAM Act and towards the RAISE Act.

None of this is good, even if it does not become law.