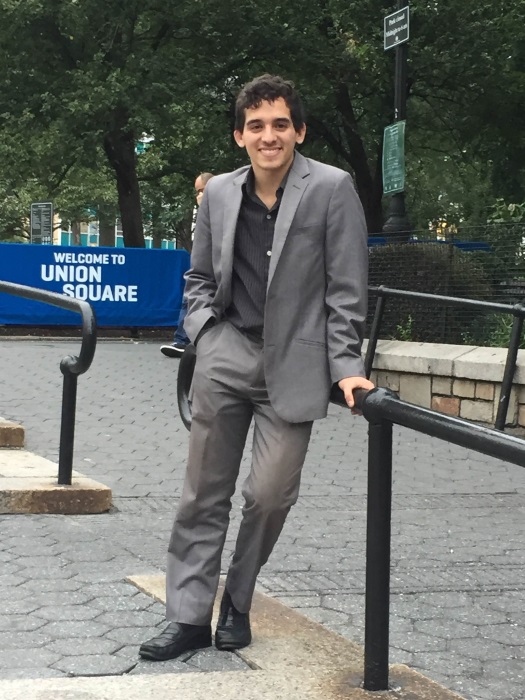 My name is Italo Medelius and I’m from Lima, Peru, originally. I come from a family of Italian descent, my grandfather was born in Italy, and he was the one that named me. My mom’s side of the family is Italian, and my grandfather married a native Peruvian woman, my grandmother. My father’s side is German, so that’s where the Medelius comes from.

I came to the United States in 2003. My father was a Congressman in Peru, and there was a time of terrorism in the late 90s and 2000s. There was a group called the “Shining Path,” and they started invading Lima. During this time, there were curfews and tanks roaming the streets; things got pretty bad. My father was in the House of Representatives leading Counter-Terrorism, and there was an assassination threat against him. He had to flee the country in 2000, as the political scene was changing. Though my father left, the rest of our family stayed for three more years. In that time, we had people following us, the secret service was spying on us and our phones were tapped. It was basically the stuff of movies. In 2003 we were able to get political asylum, and my family, my mom, brother and sister and I were able to come to the U.S. I was twelve years old at the time. First we came to Miami, but to avoid getting tracked, we took a bus all the way to a tiny little town called Hampstead, in North Carolina. We met my dad there, and everything was great until 2007. He got in a car accident, and because his political asylum had run out, he was undocumented and he ended up getting deported. I was sixteen when he was deported. He had to serve some time in jail back in Peru because he fled political persecution, but now he’s out and he’s practicing law again. It was some pretty tough times. When my father was deported, it didn’t really hit me because I was used to not seeing him for long periods of time when we were in Peru.

Living in North Carolina was tough in the beginning and we were considered outsiders. Everybody looked at us differently, and it wasn’t the most welcoming place. I received my fair share of hardships. Going into middle school I spoke English, but it’s different when you learn it versus when you actually have to incorporate it into real life. It seemed like things weren’t clicking. My grades began to drop a little bit. But by the time that I got to high school, I was pretty much assimilated with the language. Culturally, I didn’t assimilate really until college, and I still have trouble with mannerisms. In Peru, we greet with a hug and a kiss; here, it’s a handshake culture. That was hard, the little things like that. In Peru, your neighbors are very close people. Here, some people don’t even know their neighbors.

Lima’s a very big city, and moving to North Carolina, a rural little beach town, where everybody’s kind of the same, was tough. We had to be together as a family, because there weren’t resources to help us assimilate. We tried to educate people about our culture and who we were. A lot of things people said that were hurtful, weren’t because they were trying to be hurtful; they just didn’t know. I’m from Peru, and somebody asked me, “What part of Mexico is that?” I speak Spanish, and they were telling me, “I didn’t know Peruvians spoke Spanish.” People just assumed that my dad was a worker in the blueberry fields, things like that. Things that come out of ignorance, but they’re not meant badly. By being able to educate our new community and have a dialogue, it became easier for them to see us as the same.

I went to the University of North Carolina Asheville, did a double major in Business Administration and Drama, and now I’m finishing up my Masters at Rutgers in Labor Relations with a Public Policy concentration. I started off in corporate America as a recruiter. I did recruiting for Big Pharma, I worked for UPS, did contracting work for Google, GoPro, and other big companies. Then I went to a company that did pharmaceutical recruitment. But I got really turned off by a lot of pharmaceutical greed, especially working within the industry, and I decided to take all the knowledge I got from recruitment to be able to give back to the community. Just this year I went to Henry Street Settlement, interviewed, and fell in love with social services. I’m an employment coordinator. That’s essentially vocational counseling for at-risk people, both adults and youth, helping them get placed in positions, break barriers, and become self sufficient. My passion for social services comes from my own experience at age 14 working on the blueberry farms in North Carolina. That was very tough work. My parents weren’t making enough money to make ends meet, my mom was working two jobs to make minimum wage, and before my dad was deported, he was trying to get his real estate license, so we helped out. Going through the experience of hardship and struggle made me want to take the path to help other people.

I love New York. It’s not just one group of people. Everybody’s together in a diverse, mixed environment, and it’s a normalized thing. Everybody’s open to hearing about other people’s cultures, and people are always learning from each other. Back in North Carolina everybody says, “Don’t move to New York, everybody hates each other, it’s not community-oriented.” But that’s not at all what I see here. Here in New York, people just tell you how things are. And I think that’s the most human thing you can do. People are always sharing here, people are very community-oriented. There are so many resources to help people. It’s a melting pot, and everyone embraces it.