This is a post in our blog series highlighting the different programs at the New York Immigration Coalition. Check back every week to learn more about the programs that help advocate for New York’s immigrant communities!

The Civic Engagement Program at the NYIC ensures that members of the immigrant community make their voices heard by encouraging them to vote on the municipal, state and national levels, connecting them with their Congress members and creating spaces where people can express their needs and help influence decisions made about their community.

Andre Mozeak, a Civic Engagement Fellow, took time to explain the program to me. 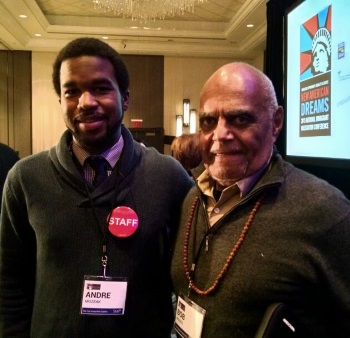 What is the importance of civic engagement in all communities?

Civic engagement is about participation; it is about allowing people to be well represented and express their voices in an effective way. One of the unique features of New York and the United States is that ordinary people can have a say and influence all codes and laws through their representatives. This allows them to create the environment they want to live in within their communities.

How do you engage the immigrant community in the political and democratic process?

It is a two way street. I think people generally have their own political ideas and a lot of people want to be involved, but they feel like they can’t or feel their voices will be overpowered. As the Civic Engagement Program, we try to find ways to engage the community by registering voters, providing educational materials to voters, and advocating for the city and state to develop programs so that people can be involved in other ways - like participatory budgeting or making the community board process more transparent. There are also a lot of ways to be engaged even if you can’t vote, so we work to empower immigrants in that respect as well. We also ensure that all this information is accessible, especially in multiple languages.

How do you involve undocumented people in these immigrant communities in the political and democratic process?

It is difficult, because you want to encourage people to participate, but you don’t want to do it in a way that would jeopardize their stay in this country, their status, their family, or put them in a difficult position. So we try to create spaces where they can share their concerns and also involve them in participatory budgeting and through the community boards project. Also, we hold lobby days where undocumented people can express their feelings to their representatives, and bring them to hearings so that elected officials can feel their presence while they are making decisions.

You said that immigrants can participate in decision making that can affect their communities through participatory budgeting. What is that?

Participatory budgeting is an awesome democratic process by which community members get to propose, design, and fund potentially huge projects in their neighborhoods using government money. Every year, New York's City Council Members are each given a certain amount of "Discretionary Funding" to use at their discretion for projects that they want to take on. Participatory budgeting transfers a portion of that (usually about $1 million) to a community process that takes several months of planning and voting by everyday individuals who live in the participating district. Last year, communities voted to build gardens, accessible ramps, and library expansions, put new technology in schools, and all sorts of other great ideas. The participatory budgeting movement is a worldwide phenomenon, sparking action in towns and cities across places like California, Brazil, and France. This past cycle, 28 council districts held their own participatory budgeting process, and the NYIC's Civic Engagement Collaborative is advocating expansion to ALL of the city's districts. We also need to make sure that there are resources in multiple languages so that all communities can have a voice in the process, therefore keeping funds distributed where they are truly needed most.

How does this program move forward after the Supreme Court Texas v. United States ruling on immigration relief?

There is a possibility that this case will come to the Supreme Court again, but in the meantime our main focus now is to push for comprehensive immigration reform (CIR). This means getting politicians elected who believe in this reform. On the advocacy level, pushing politicians to take this reform seriously and making them understand what’s at stake for all Americans with regard to supporting immigrants is key. On the grassroots level, getting people in different communities to vote for politicians, no matter their party affiliation, who will advocate for CIR is also important.

What is immigration reform and what does it entail?

Immigration reform would cover many areas of Federal immigration regulations, such as creating a pathway to citizenship for undocumented immigrants who have been in the U.S. for many years, revamping visa availability and procedures, streamlining refugee and naturalization application processes, and making immigration enforcement policies more just and fair. One of the most recent actions to address the broken system was President Obama's executive order to prioritize only violent offenders and certain other individuals charged with felonies for deportation. We as advocates are in the process of crafting our immigration reform platform for 2017 and beyond; ultimately we envision fair and just immigration reform that keeps families together, allows those who have been here a long time to adjust their status, and also updates a very outdated system.

What is the importance of this year’s election cycle?

This year’s elections are important both for New Yorkers and people across the country. In the coming months, we'll get to elect (or re-elect) our Members of Congress, one Federal Senator, our State Senators, our State Assembly Members, and the next President of the United States. Although New Yorkers only have two more visits to the polls to make - the State Primaries in September and the general election in November - almost every issue imaginable will be affected by the decisions we make; the politics of 2017 may look extremely different from anything we've ever experienced in the state and country. If the opportunity to fundamentally change many of the institutions of American life for the better is staring us right in the face, shouldn't we seize it?

How is the Civic Engagement Program getting out the vote in this election year?

We will have mailers and phone banking where people will be informed about polling sites and pushing them to plan out their way of getting there. Also, providing a place for people to speak of their concerns about their elections and using this information to find ways to help them. In order to encourage people to vote, we might show an area average voting report card. On the voter list you can see how many people voted in which area in the last three general elections, so we can have a document comparing the area average to the state or national average. We hope when community members see this, they can encourage each other to do better than other areas in terms of voting.

What are some challenges the program has faced so far?

A huge problem we had in April was that people registered for the presidential primaries, but on voting day, a lot of people were dropped from the voting list. Also, polling stations had been moved to places where elderly people or people who are busy during the day might not be able to go - and they weren’t told about it. So our role is to get the information to these people ahead of time. In such cases, all we do is keep the people informed of changes and keep encouraging them to remain active in order to get the change they want.

What is the “Immigrants Vote!” campaign?

The Immigrants Vote! Campaign allows us to expand our voter registration, education and mobilization capacity throughout the year especially with the communities in Long Island and the Hudson Valley. We already have a strong voter registration presence in New York City through the Eastern District Court House, but with our community partners we can get even closer to the ground by attending community events, forums to engage the people in conversation about the problems they face in their communities and encourage them to register to vote. Through this program, we give re-grants to member organizations that already have a strong civic engagement program or those trying to grow one where they need more capacity to build it. We launched our 2016 Immigrants Vote! campaign in July.