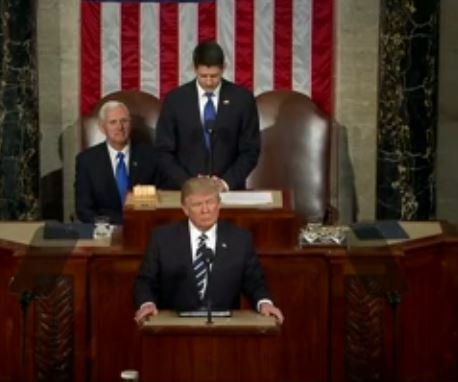 On February 28, Donald Trump gave his first speech to Congress. While some in the media have praised its “moderate tone,” Trump actually sketched out a broad assault on immigrants.

What little attention the media has given to Trump’s immigration-related remarks in the speech has focused on his renewed targeting of the undocumented. Trump said that by expelling undocumented immigrants “we will raise wages, help the unemployed, save billions of dollars, and make our communities safer for everyone.” He blamed undocumented immigration for creating “an environment of lawless chaos.”

Trump offered his by-now familiar remedy, “we will soon begin the construction of a great wall along our southern border. It will be started ahead of schedule and, when finished, it will be a very effective weapon against drugs and crime.” Continuing his association of immigrants with criminality, Trump reported that “as we speak, we are removing gang members, drug dealers and criminals that threaten our communities and prey on our citizens. Bad ones are going out as I speak tonight…”

Later in his speech, the president announced that he has “ordered the Department of Homeland Security to create an office to serve American Victims. The office is called VOICE --- Victims Of Immigration Crime Engagement. We are providing a voice to those who have been ignored by our media, and silenced by special interests.” Although immigrants are less likely than native-born Americans to commit crimes, Trump again tried to paint the foreign-born as a dangerous criminal class.

The president followed this up by identifying Muslim immigrants with terrorism. He charged that “the vast majority of individuals convicted for terrorism-related offenses since 9/11 came here from outside of our country,” ofering this disputed claim as a justification for his Muslim Ban.

As reprehensible as Trump’s attempt to identify immigration with crime and terrorism are, his most damaging proposal was nearly hidden from most viewers. Claiming that immigration harms the economy, and that legal immigrants cost the United States billions of dollars, Trump said that he was going to use immigration policy as a way to “bring back millions of jobs.” He told the assembled Congress that “Protecting our workers also means reforming our system of legal immigration. The current, outdated system depresses wages for our poorest workers, and puts great pressure on taxpayers.”

President Trump said that he would be “Switching away from this current system of lower-skilled immigration, and instead adopting a merit-based system.” We actually don’t have a system of low-skilled employment-based immigration. Our Employment-Based immigration system, which allows 140,000 people each year to immigrate, is geared towards people with more education and higher skill levels than most Americans. These are typically doctors, scientists, engineers, actors, and professors. 90% of these visas go to people with a professional degree, a Masters, or a Doctorate. So what system of low-skilled immigration could he mean?

Family members of United States citizens already wait a long time to come to the U.S., it takes more than 13 years for the brother or sister of a citizen to be issued a visa. Under a merit-based system, it might take forever since these Family-Based visa categories would be abolished.

Trump’s denunciation last night of immigrants as an economic drain led him to invoke policies in other countries. For a president who champions American Exceptionalism, this turn to reliance on Canada and Australia seems surreal. Trump said that “Nations around the world, like Canada, Australia and many others --- have a merit-based immigration system.” The merit-based system would presumably replace our current Family-Based system. Trump also charged that while “it is a basic principle that those seeking to enter a country ought to be able to support themselves financially,” in “America, we do not enforce this rule, straining the very public resources that our poorest citizens rely upon.” Trump then called for “Switching away from this current system of lower-skilled immigration, and instead adopting a merit-based system.” Trump apparently sees immigration entirely in economic terms, and not as a way for families to live together in one place. Families seem to have no value to him.

Trump ended his discussion on immigration by saying that in “reforming” immigration he would have the “following goals: to improve jobs and wages for Americans, to strengthen our nation's security, and to restore respect for our laws.” None of those goals include keeping the families of United States citizens together.

Central to our immigration policy is the idea that if a citizen marries someone from another country, she can bring him here to the United States to form a family, and that children should be able to live with their parents. Family unity is a fundamental principle of immigration law.

Trump is wrong to portray immigrant families as a drain on the treasury. Under current law, we require the citizen to agree to support the new immigrant and we disqualify the immigrant from most public benefits for the first ten years that they live in the United States. However, we do not require that citizens only marry high-skilled workers.

Trump’s coded message on immigration is the beginning of his assault on Family-Based immigration.

Pat Young, Esq. is a lawyer at the Central American Refugee Center in Hempstead.