A coalition of immigrant advocacy organizations will release a report on Tuesday calling on Mayor Bill de Blasio to increase funding in areas like legal services, adult literacy and affordable housing.

The report, entitled “A Budget for the City of Immigrants,” is the second of its kind and was released by Make the Road New York, The New York Immigration Coalition, The Asian American Federation, Federation of Protestant Welfare Agencies, and the Coalition for Asian American Children and Families.

Despite increased funding for immigrant-specific causes since de Blasio took office, the report found there are “considerable unmet needs” when it comes to making the city more welcoming to newcomers who face barriers to education and work force development.

Steve Choi, executive director of the New York Immigration Coalition, said the city’s budget should reflect the importance of the immigrant population and called on de Blasio to help ensure new immigrants become engage in the civic process.

“In a city where nearly two thirds of our population are immigrants or the children of immigrants, we are not a 'special population' -- we are New York City, and the City's budget must reflect this,” Choi said in a statement. “We call on our city leaders to acknowledge this reality and incorporate our recommendations into the final budget.”

Rosemary Boeglin, a spokeswoman for de Blasio, said supporting the city’s immigrant communities continues to be a central part of the administration’s push to combat income inequality. She pointed to some of the programs which the report calls for maintaining and which the administration is funding in part in the executive budget.

“Earlier this year, the Mayor launched ActionNYC, the nation’s largest investment by a municipality to prepare for [President Barack Obama's] executive action on immigration,” Boeglin said. “At the conclusion of last year, the Mayor launched ActionHealthNYC to develop a framework for high quality health care access for immigrants regardless of status. We look forward to working with our partners in the City Council, advocates and immigrant communities across the five boroughs to build on this important work.”

Key proposals in the report include a request for $16 million in funding for adult literacy for immigrants and others. The groups are also requesting $10 million for ActionNYC.

According to the mayor’s executive budget, which he issued last month, the ActionNYC budget for fiscal year 2017 will be nearly $7 million and since its launch in February has reached 16,000 immigrant New Yorkers, administration officials said.

In the area of immigration services, which are in part administered through the mayor’s Office of Immigrant Affairs, the groups are asking the administration to maintain $2 million to continue to support legal and other social services for unaccompanied minors facing deportation.

According to the data, since the program was launched in fiscal year 2014 it has served more than 1,450 immigrants and obtained relief for 452 individuals. Without legal representation, only 3 percent of those who are detained and facing deportation receive favorable outcomes in their cases. Individuals are 10 times more likely to prevail in a case if they have a lawyer, data shows.

The organizations are also asking de Blasio to maintain funding levels for the IDNYC program, which has helped thousands of undocumented immigrants in the city secure an acceptable form of identification in the city.

The groups’ budgetary wish list also includes several items that are being pursued by different advocacy sectors across the city, including senior citizen advocates, police reform groups and supporters of the Summer Youth Employment Program. 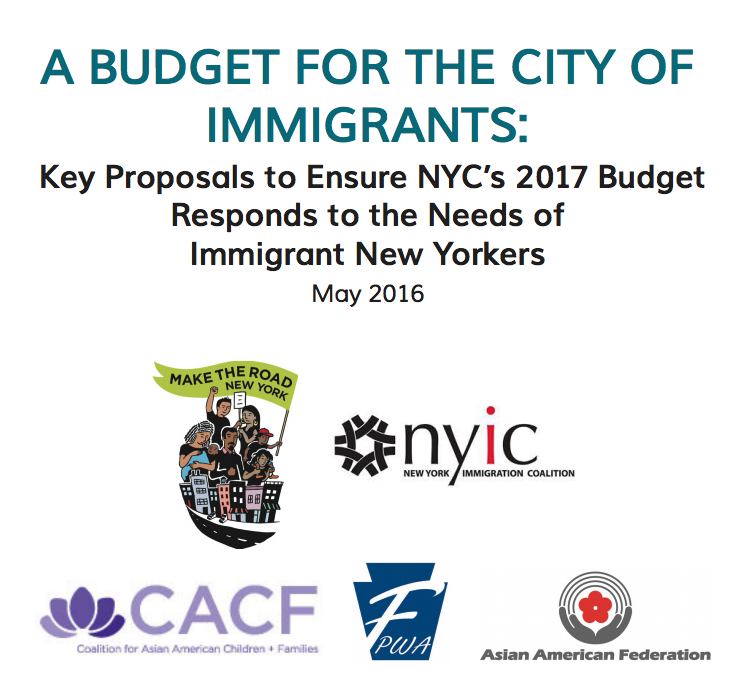