The New York Immigration Coalition was founded in 1987 with one fundamental conviction: our voices are stronger together.

Our first project as an organization was to ensure that immigrants across the state had the resources they needed to take advantage of a 1986 law that allowed undocumented residents to adjust their status.

In the decades since, the NYIC has coalesced New York’s immigrant communities and the organizations that serve them to amplify the political demands of immigrant New Yorkers and advance positive social change. We’ve built a robust state-wide infrastructure—including the establishment of five regional offices—and have expanded our focus to include not just immigration law and policy, but some of the most salient issues that impact the lives of everyday New Yorkers: education, health care, and civic engagement.

Through spearheading innovative policies and ambitious campaigns to empower and protect immigrant communities, the NYIC and our members have helped to usher in historic, progressive change at all levels of government.

Learn more about our work and major highlights from our 30+ years of advocacy: 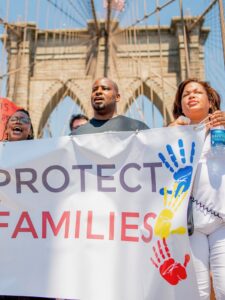 November 6, 1986
The Immigration Reform and Control Act is signed into law by President Reagan. This legislation made it illegal to hire undocumented immigrants, and simultaneously allowed millions of immigrants to legalize their status.

July 1987
The NYIC is founded with support from The New York Community Trust. to work on immigration law and immigration service issues in the aftermath of the passage of the Immigration Reform and Control Act.

November 29, 1990
The Immigration Act of 1990 is passed and signed into law by President George H.W. Bush. This legislation overhauled the legal immigration system, delineating family sponsored, employment based, and diversity based paths for immigration to the United States.

1994-1995
The NYIC launches a statewide citizenship campaign: “Have a Voice. Make a Difference. Become a U.S. Citizen." 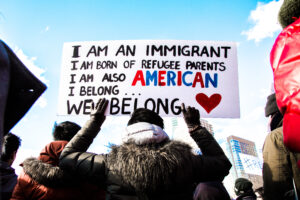 September 30, 1996
President Clinton signs the Illegal Immigration Reform and Immigrant Responsibility Act of 1996 into law. This legislation expanded the definition of who was considered deportable and instituted harsher penalties for illegal immigration.

Summer 1999 - 2000
200,000 in 2000: The NYIC coordinates its first high-profile campaign for immigrant voter mobilization in partnership with roughly 20 member groups. About 70,000 individuals sign pledges to vote with over 100 voter education events held.

September 11, 2001
Coordinated terrorist attacks on the World Trade Center and the Pentagon lead to nearly 3,000 lives lost. The aftermath of 9/11 spurred an unprecedented and relentless tide of Islamophobic and anti-immigrant hate across the United States.

2002 - 2004
In the aftermath of 9/11, the NYIC organizes 800K legal services collaborative providing immigration, social services and employment law assistance to immigrants impacted by the disaster; training on 9/11 issues and interactions with immigration law and immigrant community issues for groups citywide; and health and mental health issue roundtables and policy responses.

September 2002
The National Security Entry-Exit Registration System (NSEERS) is created in the aftermath of the 9/11 terrorist attacks. This discriminatory system collected information and tracked people who were entering the United States from 25 specific countries, and disproportionately targeted Muslim-majority countries.

March 2003
ICE is founded in the aftermath of the 9/11 terrorist attacks, and is charged with detaining and deporting undocumented immigrants already within the United States.

May 2004
Immigrant Advocacy Fellowship Program—The first cohort of leaders enters our fellowship program, designed to cultivate a new generation of immigrant community leaders and help them build their communities' power.

April 10, 2006
Historic NYC Immigration Rally—In protest of H.R. 4437, the NYIC is a lead organizer of the largest immigration rally in New York City's history, with more than 300,000 New Yorkers filling up Broadway in lower Manhattan. NYIC member groups mobilize their communities in record numbers. Rallies take place in more than 100 cities across the country. 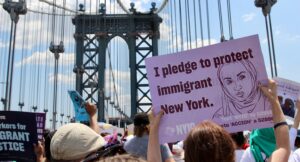 September 13, 2006
Tackling Hospital Language Barriers—New state rules go into effect requiring hospitals to provide interpreters to patients who have difficulty communicating in English after a multi-year campaign by the NYIC and member groups that included on-the-ground monitoring of hospitals, the filing of civil rights complaints, and putting pressure on legislators and regulators.

July 22, 2008
Mayor Michael Bloomberg signs Executive Order 120, a landmark policy that directs all city agencies to provide interpretation and translation services to New Yorkers with limited English. Thanks to ten years of advocacy from the NYIC, all New Yorkers, regardless of English-language ability, will be able to access important city services.

March 21, 2010
March for America!—The NYIC leads the statewide campaign to mobilize 235 buses to Washington D.C., sending 12,000 New Yorkers from every region of the state to the nation's capitol demand immigration reform in the largest mobilization to date of the Obama administration. This action results in a major address by the President to the nation reaffirming his commitment to immigration reform; an agreement by Sen. Schumer to meet with more than 80 NYIC member groups and the release by Sen. Schumer, with Sen. Graham, of their bipartisan blueprint for immigration reform legislation.

April 23, 2010
Arizona Governor Jan Brewer signs into law SB 1070, which made the "failure to carry immigration documents a crime and [gave] the police broad power to detain anyone suspected of being in the country illegally." This legislation was one of the most severe anti-immigrant bills passed in recent history, and sparked outcry across the country.

June 1, 2011
Governor Cuomo Announces Opposition to Secure Communities—Secure Communities, a federal program that uses local law enforcement to identify individuals for deportation, casts a wide dragnet; gives rise to racial and ethnic profiling; and compromises police/community relations. After months of coordinated advocacy by the NYIC, its member groups, and other allies, Governor Cuomo announces the state's opposition to the program.

October 6, 2011
Establishing New York's first statewide language access policy, Governor Cuomo issues Executive Order 26, which provides language assistance services at 28 state agencies. This victory is due to more than a decade of advocacy after the NYIC expanded its work on language access beyond New York City.

June 15, 2012
President Obama announces the Deferred Action for Childhood Arrivals (DACA) program, which allowed young undocumented immigrants to gain work permits and driver's licenses, pursue higher education, and be shielded from deportation. This program went on to protect over 600,000 people, but remains a temporary solution renewed two years at a time, and is no longer open to new applicants due to pending court cases.
August 15, 2012
As the federal government begins accepting DACA applications, the NYIC sets up an event in downtown Manhattan and across the state in partnership with member organizations to distristibute information,provide legal assistancepre-screenings, and follow-up appointments with legal providers 3,000 people and training more than 9,000. Community members, groups, legal providers, and government agencies.

February - July 2014
A New York City ID for All New Yorkers—At the State of the City, Mayor Bill de Blasio made a historic announcement to support a New York City ID card for all New Yorkers regardless of immigration status, a result of the advocacy of the New York City Municipal ID Coalition and the NYIC. For the first time, iImmigrants who lack access to a form of ID will be able to use this card to access libraries and municipal buildings, open bank accounts, sign leases, and more to ensure that the NYC Municipal ID card will have broad appeal and that immigrants and other vulnerable communities can access this ID safely.

August 6, 2014
Combating Immigrant Fraud—The Immigrant Assistance Service Enforcement Act was signed into law by Governor Cuomo. The bill, which provides new and increased protections for immigrants, was closely crafted by the NYIC with our member agencies and partners, and Assemblymember Marco Crespo and Senator Ruben Diaz.

November 14, 2014
Mayor Bill de Blasio signs Introductions 486-A and 487-A into law, ending New York City's cooperation with federal immigration enforcement (except in situations where an individual has been convicted of a violent crime) and ending the presence of ICE at Rikers Island and all city facilities.

November 8, 2016
Donald Trump wins the 2016 presidential election, running as one of the most openly xenophobic and anti-immigrant candidates in modern history.

2017
In the aftermath of the 2016 presidential election, the NYIC launched the “This Is Our New York” campaign, in which rapid response efforts and rallies became part of the day-to-day fabric of our work. In the first year of "This Is Our New York," the NYIC regranted $856,000 to 36 member organizations, building their capacity to respond to emerging needs in their communities; assisted 267 families from more than 20 countries in the nine days after the first travel ban was announced; and distributed more than 16,000 community safety toolkits in English, Spanish, Chinese, Creole, Arabic, and French.

January 27, 2017
In response to the enactment of Trump’s first Muslim ban, the New York Immigration Coalition led the #NoBanJFK movement, assisting travelers from over 20 countries and organizing hundreds of lawyers and volunteers. The protests at JFK sparked actions across the nation, including a rally held in Battery Park the next day, which drew over 30,000 people. Since its enactment, over 100,000 New Yorkers across the state have rallied together to resist this executive order. 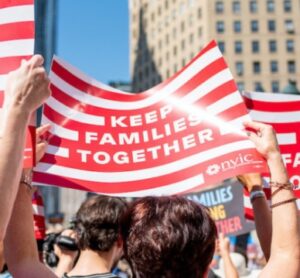 June 17, 2019
The NYIC wins the historic Green Light campaign, expanding access to driver's licenses to all New Yorkers, no matter their immigration status. This victory means that New York's roads are safer and immigrants are better able to participate freely in our communities.
June 27, 2019
Census 2020—In the lawsuit Trump v. New York, the NYIC defeats President Trump’s racist citizenship question at the Supreme Court, preventing the census from asking participants their citizenship status.

2020
The federal census takes place to determine the population and changing demographics of the United States.
March 1, 2020
The first case of COVID-19 is confirmed in New York, and NYC rapidly becomes the epicenter of the first wave of the global pandemic. Immigrants and people of color were the hardest hit by the pandemic, due to job losses, a lack of access to healthcare, and serving as frontline workers.
May 2020
COVID-19—The NYIC raises $2.9 million to provide direct cash assistance to more than 5,000 New Yorkers excluded from the federal stimulus package.
June 10, 2020
ICE Out of Courts—The NYIC helps pass a ban on Immigration and Customs Enforcement's (ICE) policy of courthouse arrests, making it illegal to arrest anyone on the grounds of New York State courthouses or of anyone required to travel to a courthouse as party or witness to a lawsuit.
June 18, 2020
DACA Saved at SCOTUS—The Supreme Court rules that the Trump administration cannot terminate the Deferred Action for Childhood Arrivals (DACA) program, thanks to the key role the NYIC plays in the national movement to save this critical program.
December 27, 2020
COVID-19—The NYIC helps win $4 billion in pandemic relief for mixed-status families that are finally included in federal pandemic aid after initially being excluded.
April 6, 2021
Excluded Workers Fund—NYIC partners with the FEW Coalition to establish a $2.1 billion fund for New York’s immigrant essential workers that were previously excluded from federal pandemic relief aid.
December 9, 2021
Our City, Our Vote—In partnership with the OCOV Coalition and United Neighborhood Houses, the NYIC led the campaign to pass Intro 1867 in the New York City Council to expand municipal voting rights to nearly 1 million immigrant New Yorkers with legal permanent residence status or work authorization.

April 9, 2022
Coverage4All—NYIC and the Coverage4All Coalition expand Medicaid coverage to all eligible women, regardless of immigration status, for up to 12 months post-pregnancy. Our campaign also successfully removed the citizenship requirements for access to Medicaid for those 65 years of age or older across New York State.