This is a post in our blog series highlighting the different programs at the New York Immigration Coalition (NYIC). Check back every week to learn more about the programs that help advocate for New York’s immigrant communities!

The Regional Advocacy Program at the NYIC focuses on providing member organizations, and immigrant communities throughout New York State with the resources they need to better their lives. This program also engages the NYIC program areas in regions outside of New York City, and connects immigrants outside the City with organizations, service programs, and trainings happening in their areas. They hope to connect leaders in these regions with the resources needed to advocate and represent their communities better.

I sat down with Francis Madi, Regional Outreach Associate, to talk more about the program. 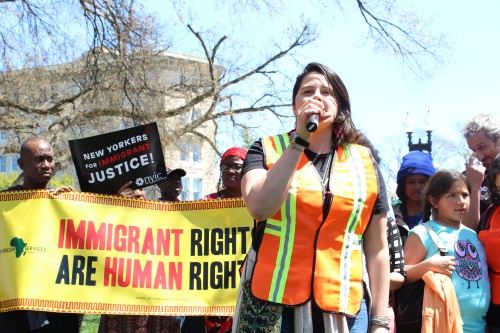 Tell me about the Regional Advocacy Program.

The Regional Program was created because the NYIC wanted to expand their work to all the regions in New York State - to make the NYIC a truly statewide organization. Although, the NYIC office is still located in the city, the regional advocacy team constantly travels across the State in order to listen to the needs and concerns of service providers working in these regions, and we keep this in mind as we make decisions within the NYIC to ensure that we are inclusive of everyone in New York State.

A lot of our work is intersectional internally. We have to work with all the programs at the NYIC to ensure that we are giving service providers in different regions the resources they need to offer the best service possible to immigrants in the area. In a way, we are the bridge that connects the NYIC programs to the regions in the State of New York. The projects and campaigns we have right now include the provision and coordination of legal services, language access advocacy, worker’s rights and the development of the statewide Driver's License coalition - Green Light New York: Driving Together. We also organize convenings for organizations and partners who work across New York State.

The Driver’s License Campaign is a big project going on right now in the program. Can you please tell me more about it?

Green Light New York: Driving Together is a campaign we just launched this year. The last time there was a similar campaign was in 2006. In 2007, Eliot Spitzer, the Governor of New York at the time, signed an executive action to allow undocumented immigrants access to state driver’s licenses, but because of the backlash he received, he ended up backing out of it.

This time, we are working statewide to revitalize this campaign because there is a big need for driver’s licenses for immigrants outside of New York City. Immigrants, specifically those who are undocumented in these regions, have a difficult time moving around and functioning without these licenses because they can’t get to school, work, or other appointments without a car. Immigrants in the city do not have to worry about this because there is public transportation readily available, but that is not the case for those outside the city. So that’s why the effort is being made statewide to engage as many community members, stakeholders and leaders in this renowned fight to get Driver’s Licenses access back.

We are also trying to learn from our past setbacks, in order to ensure that this campaign succeeds. We are bringing in more stakeholders than we did before, we are trying to influence public opinion by highlighting all the economic benefits of this campaign and we want to ensure that if we do receive backlash, we are ready and prepared to handle it so that our legislators will feel comfortable supporting this campaign.

You also said that the regional program has convenings and assemblies. What is the purpose of them?

One of the priorities of this program is to hold annual convenings in the regions we work in - which is currently Long Island, the Hudson Valley, Syracuse, Rochester, and Buffalo. The purpose is to create a space where organizations across the state can assess the needs and issues going on in those areas. We then gather that information and bring it to the NYIC’s annual staff retreat, in September, where we share all the information we have collected at these convenings to the board and staff. That process helps us decide our State priorities for the NYIC for the next year, and determine the kind of help we can offer to these regions.

What are some of the challenges and successes the program has had so far?

One major challenge is the amount of time that we spend outside of the office. Because we constantly travel to different regions, we cannot constantly interact with the programs in the NYIC. We have to ensure that the issues we hear about are made clear to the programs at the NYIC so that we can effectively provide the help they need. Another challenge is the current lack of services outside of the city. Immigrants have much less access to services than they would in the city, and so many of the organizations currently serving these areas are over capacity. Overall, our major challenge as a program has been to ensure that we are giving legislators, decision makers and even the staff at the NYIC the information they need to be able to help every immigrant living across New York State - and not just New York City.

One of our successes has been establishing the structure of the coalition Green Light New York. Also, the fact that we have been successful at creating spaces where people from all the regions in New York State can come together and help make decisions about their regions and communities. A third success was the NYIC’s response to the unaccompanied children situation in 2014 and 2015. We responded on the local and state levels and advocated for more services for these children, most of whom are on Long Island. Finally, the fact that we have people who are willing to travel and be present all over the state is a success because it has enabled us to expand our work beyond city limits.

What kinds of training do you offer members? What do these trainings entail?

The trainings depend on what our member organizations in those regions want and need. Primarily we have had trainings on language access, on our campaigns like the driver’s license campaign, Coverage 4 All (a project of the NYIC’s Health Advocacy program), unaccompanied children legal services, and adult literacy. We have also provided know your rights trainings since January, covering what to do in the event of an immigration raid. Other trainings also include college affordability, and the immigration Navigator trainings. It all depends on what is happening at the moment and what people need as well as the resources we can offer.

What is the importance of the Regional Advocacy program?

It is important because immigrants do not only live in New York City. We therefore have to ensure that if the NYIC says we work for the immigrant community, then we are working for these communities not just on the city level, but also on the state level so that they do not feel isolated. We have to spread our resources and knowledge as far as we can so that we are able to help organizations and service providers.

We have a long way to go, but for now the Regional Outreach program will ensure that the NYIC is truly a statewide umbrella organization representative of all our member’s needs.