Jummah prayer is a congregational prayer (ṣalāt) that Muslims hold every Friday. The action was conducted in anticipation of executive orders that President Trump signed today that will ban entry to the United States from seven Muslim-majority countries and halt refugees from being admitted for at least 120 days, among other directives. The executive orders were signed at 4:30pm this afternoon.

In a show of force, close to two hundred people attended the action. While eighty Muslim conducted their Jummah Prayer, interfaith clergy and allies linked arms, surrounding the prayer in a show of solidarity and protection. After the rally, attendees linked arms and marched, forming a human chain around the immigration court at 26 Federal Plaza. 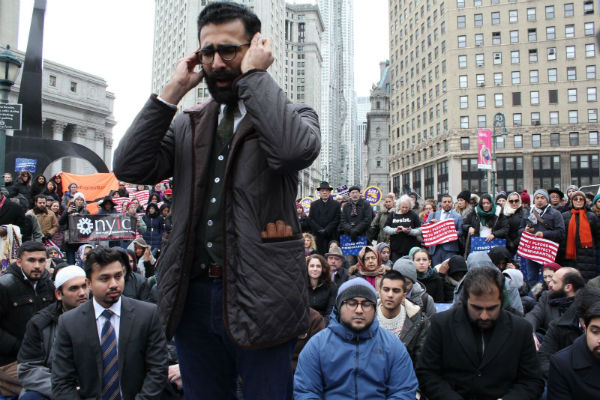 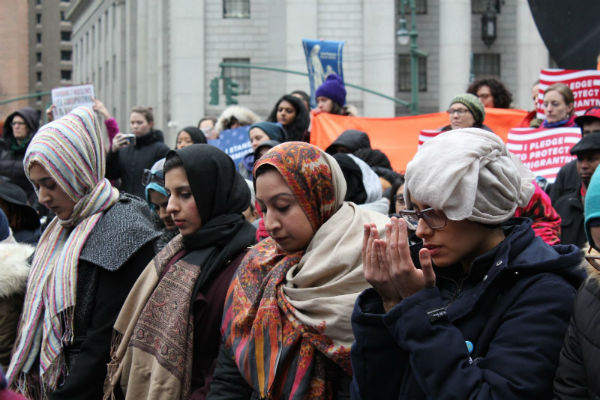 Imam Khalid Latif said during his remarks, “My standing here today with the New York Immigration Coalition was fueled by my sense of values. Right now is a time where we have to meet this hatred with real love, we have to meet this selfishness with real selflessness, and allow for those values to not just be things that we speak about but things that we're moved by and act upon. It is important for us as diverse communities to continue to come together in moments of solidarity, and then continue to leverage our collective clout in order to elevate those who are under-served and underprivileged. That is what this rally and convening is really about today.” 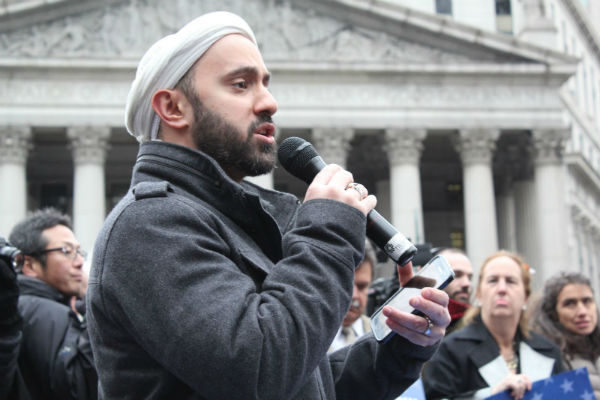 Reverend Chloe Bryer, executive director of the Interfaith Center of New York said, “The ugly discrimination present in this week's executive orders is just what our Founding Fathers warned us against; it is what our Constitution seeks to protect us from; and it is what our religious traditions teach us to overcome. Rejecting war-torn refugees at our borders and making Muslims into second-class citizens at home stands against our proudest traditions as a nation and against the sacred beliefs we share as people of faith--Jews, Christians, Muslims, Sikhs, Hindus, and Buddhists alike. As faith leaders, as Americans, and as New Yorkers, we will, with our elected officials and fellow citizens of good conscience, do all we can to fight this massive step backwards in our almost 250 year national struggle for a more perfect union.” 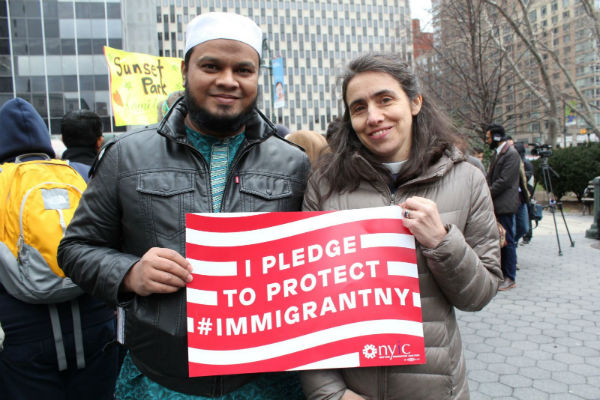 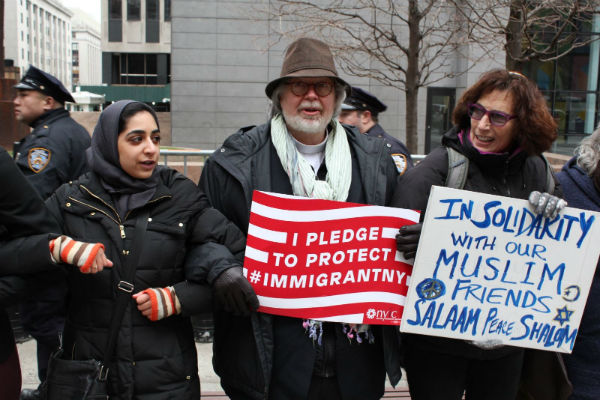 Mark Hetfield, President and CEO of HIAS stated, “For most of our history, America has welcomed refugees as a strength. It’s a deep and tragic irony that Trump is threatening to slam the door in the faces of refugees on International Holocaust Remembrance Day, as the entire refugee convention came out of the Holocaust and the failure of the international community to protect Jews and survivors.”

Steven Choi, executive director of the New York Immigration Coalition said, “Today’s interfaith action is a beautiful coming together of people of all faiths, races, and ethnicities to protect and support our Muslim neighbors and friends. We are here to show President Trump and the federal government that New Yorkers will stand by each other against these anti-immigrant attacks. The executive orders we are anticipating will institute a de facto Muslim ban on immigration and suspend the country’s refugee system. This is an affront to our core founding values of dignity, liberty and justice, and disgraces U.S. leadership in the world. The implications of the declaration are clear--this administration is discriminating on the basis of religion. We will not stand silent while these dehumanizing, unconstitutional, and Islamophobic actions target immigrants and those fleeing persecution and war.”

To view a livestream recording of the Interfaith Action, click HERE. 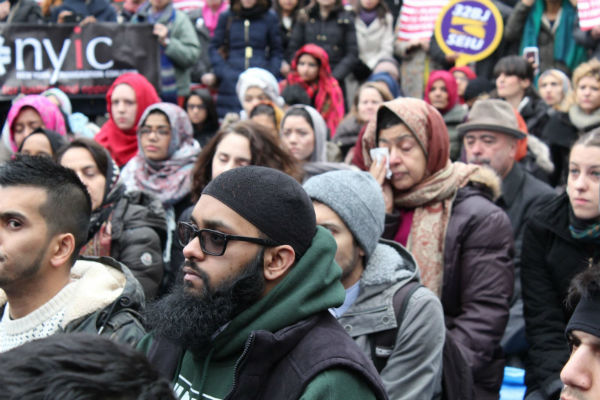 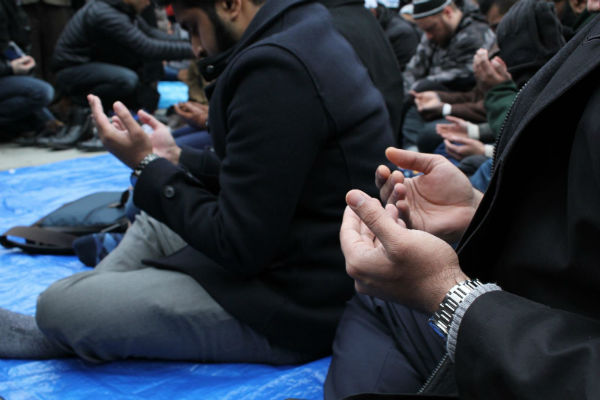 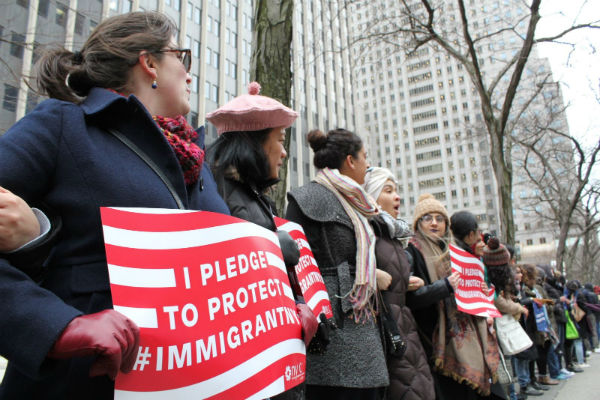 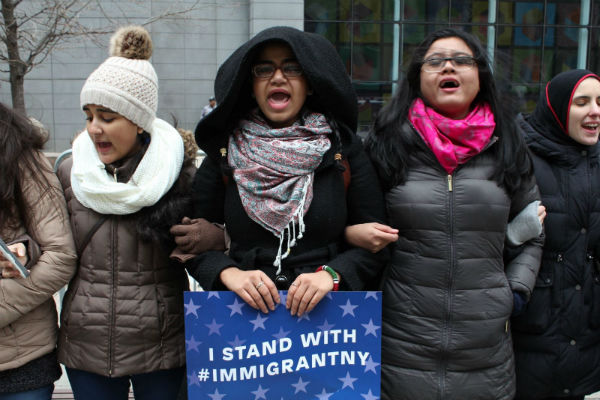 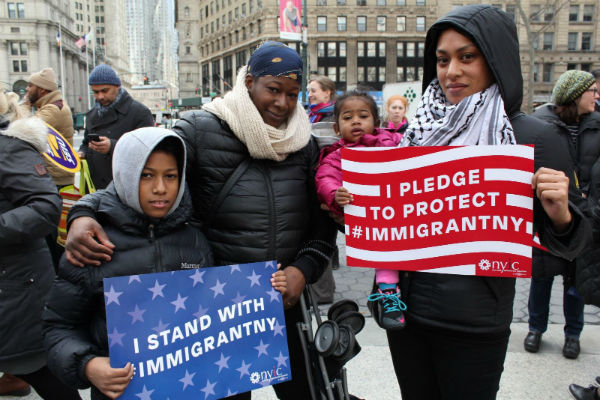